It has long been known that the NFL is shifting into an offense-centric league for years now. New rules have been neutering the defensive players and empowering the offensive ones. Plus, the game plans have shifted towards the passing game and away from the running game, meaning longer games and lots more points – all of which drive the TV ratings and…fantasy football. Well this week, the points were certainly on display. Even the woeful 2013 Vikings got going this week and beat the Eagles – scoring a whopping 48 points!!! Of course, that didn’t meant they were playing lockdown defense while doing it.

If you want points, look no further than Jamaal Charles. The man was an absolutely beast this week, scoring just 1 rushing TD, but also scoring 4 receiving TDs!!

Yeah, some teams do still play some defense, like the 49ers, but this week they didn’t really need to press. The Bucs probably wish that they had this “trick play” back.

And then you had the Packers and Cowboys. You remember the Cowboys, right? They got torched last week? Well, they had a good lead over the Packers and Jason Garrett was feeling it!

But guess what happened?! The defense collapsed and Romo threw 2 picks in the final 3 minutes of the game and the ‘Boys snatched defeat from the jaws of victory. And Jason Garrett demeanor?

Well, many HFFL owners feel like they’re looking in a mirror when they see that Garrett face. In fact, get this: only one #1 seed made it to their league’s Super Bowl but two #6 seeds made it! Let’s dive into the dirty details.

For weeks now, it’s seemed like a foregone conclusion: Rüssnôçérôse and The Muffins would meet in the Super Bowl. But this week, the rubber met the road and the mighty were tested like never before. Scores:

You read that right, both Russ and the Muffins met their match this week in DiDDy and the Bops respectively. The mind games between Russ and Jim started early in the week. When Mike Shanahan announced he was benching Russ’ QB, Jim saw an opportunity. He quickly added every top QB on the free agent market to his team, effectively limiting Russ’ replacement options! Russ was forced to add and start Matt Cassel – who turned in a big 29 points! The six QBs on Jim’s bench combined for 103 points and 2 of them outscored his starter (Drew Brees). Still, Russ’ strong week couldn’t overcome Charles’ 51 and Jim will play in the Super Bowl and has earned a trip back to the LoC next year! On the other side of the bracket, the Muffins and Bops had a good duel going into Monday night, where Mike needed some serious points from Reggie Bush to pull out a win after most of his roster underperformed. Unfortunately, 15 points were not enough and the Muffins fell. The #6 seed Bops have run the gauntlet and will play the #5 seed DiDDy for all the marbles next week! Mark earns an LoC ticket for next year! Russ and Mike will fight it out next week with the winner earning the right to stay in the LoC and the loser getting demoted. It’s like the rug got pulled out from under these two tough teams this week.

In the Toilet Bowl semi-finals, Ray Rice’s team ALMOST scratched their way into the Toilet Bowl, but the Assassins got the better of them. They will play Unstoppable, who still has a chance to get into the LoC in spite of losing Gronk for the rest of the way last week.
Finding their final resting places this week: Monday Night finishes 5th, Nana Nancy 6th, KRUG Kaiser 11th and the Limbs 12th.
Super Bowl Week Matchups:
Week 16 – Pre-Game

You’ll recall that the PL has been the most evenly matched league all season long and this week proved that point as most games were close yet again.

But who had Jamaal Charles!? Scores:

In the playoff semi-finals, the Furballs seemed to have a lot going for them….and then they met Jamaal. Yes, Carl’s team was the recipient of those 51 points and he needed almost all of them to defeat the juggernaut that is Luke Albertson. Luke found himself in Dev’s camp of furiously rooting for the Lions on Monday night with Stafford and Bush on his roster. Again, the Lions came up short and Carl hung on to win by 3 and advance to the PL Super Bowl and to the LoC next year! The other semi-final game was a tight contest between the USFL and Wayne. Well rested from a 1st round bye, Wayne bested Matt by 12 and advanced to meet Carl for all the PL marbles! Looking at the rosters, both the Super Bowl and the 3rd place game will be close next week!

In the consolation bracket, somebody stop the Moneyballers! Isaac’s team is rumbling through the Toilet Bowl (there’s gotta be a better way to say that)! After dispatching Big Hassle by 1 point last week, he crushed the Cieras this week and advanced to the Toilet Super Bowl! There, he will meet The Dominators, who are finally living up to their name! Spencer scored 136 this week to knock out the Outlaws and advance! Those two teams will play for the final LoC ticket from the PL next week!
Finally getting tucked in this week were the following teams: The Eh Team in 5th, Double Dream Hands in 6th, Chobani Champions in 11th and Big Hassle in 12th.
Super Bowl Week Matchups:
Week 16 – Pre-Game

In the EL, the top seed was vulnerable, but we didn’t think he was THIS vulnerable. And a couple of rookies are going to play for the first ever Elite League title! How fitting. Scores:

The top seeded Brett’s team had a rough week. With some wishful thinking involved, he left Adrian Peterson in his lineup this week even though AP didn’t suit up. None of his RBs lived up to hype though and Brett managed just 68 points. The ‘Finches barely broke a sweat and cruised to a big win and a trip to the Super Bowl on the back of….Dan Bailey? Dan’s kicker…Dan…put up 24 points to lead his team! Meeting the ‘Finches in the Super Bowl will be Chad’s Sunday Shame, who had their hands full with Pacino this week but got the 9 point win in spite of scoring only 7 points from the RB position! Chad has been formidable all year long and has truly earned this trip to the Super Bowl!

No Jamaal Charles in the playoff bracket, so who in the Toilet Bowl reaped those rewards? That would be Ivan Drago, who used those 51 points to beat H-Ike in the 11th place game!

In the games that mattered, however, Nudibranch came up big when it mattered and beat Ihenachos Deluxe to advance to the Toilet Super Bowl! He will face Nerd Herd, who managed to beat Los Perdadores. Bob is a HFFL veteran who has never tasted the sweetness that is the LoC. Next week’s Toilet Super Bowl is his chance to remedy that!
Playing their final games this week: Harper’s Team (5th place), Longfellow Bulldogs (6th), Ivan Drago (11th) and H-Ike’s Daddy (12th).
Super Bowl Week Matchups:
Week 16 – Pre-Game

DiDDy!!! Jim knew he would need to use every ounce of energy he had to beat Russ’ tough squad. Russ had only lost 2 games all year, after all. So Jim started by vacuuming up the top free agent QBs to steal them from Russ. It almost backfired as Cassel gave Russ a good game and some of his bench QBs played well, but Jim had the ace in the hole of Jamaal Charles and sent Russ packing. Jim will play for the LoC title next week.
Fact: Jim won the title in the inaugural year of the HFFL back in 2007 and hasn’t won since. His final roster that year looked like this: 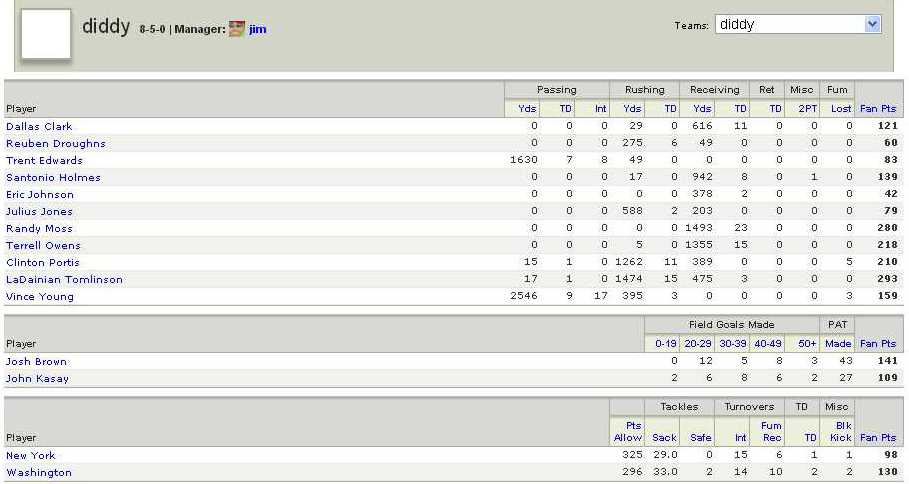 It’s HFFL Super Bowl Week! Next week at this time, we will crown 3 new champions! We will also know which 12 teams have earned their tickets to the LoC next year! And the NFL makes this pretty easy: No Thursday game this week!
But in the midst of all the celebration, let’s not forget that some teams are already done for the year after this week. There are some whose fun activity has ended in disaster.

To them I would say, thanks for a great season! Pick a team to cheer for next week and let’s end this season on a high note! Good luck, everyone!
Until Next Week,
Commish Peter