It was yet another wild week in the NFL. Last week the Broncos looked unstoppable and kept the pedal down. They even decided to rest Peyton Manning, but Peyton had other ideas. This week, they lost to the Rams and only managed 7 total points! What happened?! Well, the Rams got plays like this to go their way:

That’s two deflections, a catch by the QB and a decent little gain. Crazy. The Broncos also got shook up when Emmanuel Sanders got laid out by this big hit:

​
And Cleveland lost this week at home to Houston, but at least Cleveland looks like a nice place to play…. if you’re a pigeon.

​
Now, there are only two weeks left in the HFFL regular season! And we got our first two playoff clinchers this weekend! Everyone else is still fighting for their playoff lives with the full knowledge that half of each league will keep each other company in the Toilet Bowl.

Yeesh…. But let’s focus on the good!

We begin in the LOC where we find our first playoff clincher! Scores:
The Champions put up a good fight, but the power of Malicious…. could not be undone. Mark’s Packers dismantled another team and edged out Tom’s squad by 14. So Mark has now clinched a playoff spot in the LOC and looks almost unstoppable. _diddY has fallen on some hard times, dropping 2 of his last 3 games. This week he lost to a resurgent Mongrels team that benefited from the coming out party that Mike Evans threw (32 points?!?). The Snapping Turtles sure must be grateful to have played the Lakehouse Vikes this week. Wayne’s 54 points wouldn’t have beaten anyone BUT the Vikes and their 47. If Carl had gone against his principles and started the Packers defense from his bench, he could have added 30 points to his total. Hard to fault a guy on principles though. The Muffins continue to underperform, this week losing to the ‘Finches and falling to 10th place. Time to start planning for an epic run through the Toilet Bowl bracket. Country of Chad pulled together and got a big win over Sieve and have now climbed into 3rd in the standings! And what is going on with Team Python?! The once-strong squad has now lost 2 in a row and fallen all the way to 5th place after getting beat by the Nerd Herd. Brian needs to get it together or risk missing the playoffs!
Current LOC Standings:

And now for the Bizarro League. The top four teams in the PL standings each have at least 1 tie. What are the odds of that happening?? In any case, it means that these rankings are going to be moving A LOT in the next two weeks. Scores:
The two pastors faced off this week in an epic tilt that ended…. with a tie. Where is boasting? It is excluded. Chris and Spencer both undershot their projections by a significant margin and landed at 68 points. They both remain in the mix atop the league though. Hanging onto first for another week is Quantum Phonics who beat Orcwardness by 14. Quantum will play the Cieras next week in a huge game with lots of playoff implications. The hottest team in the PL right now is The Eh Team, who beat deBrewliner in an international match. Eric’s team opened the season 0-5 and looked like the doormat of the league. Since then he’s undefeated, winning 6 straight! Crazy. The Limbs notched a pedestrian win this week over Vandalay to move into 4th place. They are hoping the addition of an active Josh Gordon this week will push them over the top. Ableman also got a win over Nancy and now sits in 5th. And Herbal Tonic is showing some fight, beating WannaBe this week!
Current Muddled PL Standings:

Most leagues have a top tier of teams. The top tier in the EL consists of one team: InstaGraham. Hyatt is definitely gunning for the ballerina trophy this year. Scores:
Yep, another week, another big win for Hyatt’s team. This week it was over Butterslide. Hyatt has so many weapons right now and if Mike Evans is going to start producing big numbers consistently, the rest of the EL is in big trouble. Also, Hyatt plays the bottom two teams in these last two weeks. Elsewhere, Nudibranch shot down the Gwardians by 7 in an entertaining matchup and moved up to 2nd in the standings. The Gwardians slip to 4th for the moment. Also in the playoff hunt is Ihenachos, who got a win this week over Sesquipetantic. Andy has the 2nd most overall points in the EL and may pose the biggest threat to InstaGraham in the playoffs. Rüssnôçérôse started the season strong, but has fallen on hard times lately. This week he lost to BigHassler and the two of them flipped seeds so Russ is currently out of a playoff spot! Yikes. Jake’s Quality Team had a rough week, scoring only 54 and getting clobbered by Chobani Champs. And in a shouting match, whatsyoname got the better of H-Ike’s Daddy’s autopilot.
Current EL Standings:

We go with one of the hottest teams in the HFFL: The Eh Team!

​
Eric’s turn around has been pretty incredible. From winless in his first 5 to undefeated in his last 6. What fuels this improbable comeback? Probably poutine and Tim Horton’s. Eric may be a temporary resident of Canada, but now that this picture exists, they will never forget him north of the border. 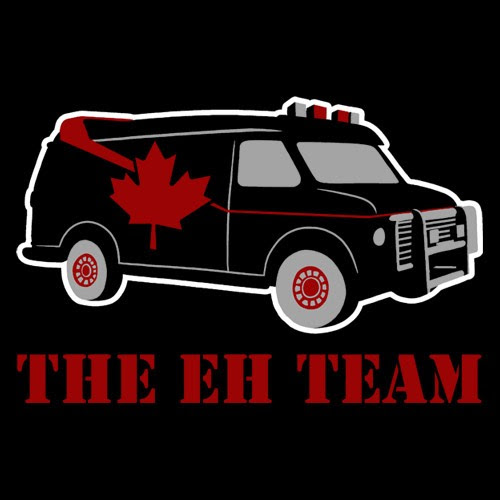 Only two teams are on byes this week: Carolina and Pittsburgh. Thursday night is Chiefs vs. Raiders.
The trade deadline has now passed, so the waiver wire and free agency are your only hope to fix your teams from now on! Only two weeks left in the regular season!
Also, I’ve had some issues with delivery of this email to a few accounts. It seems that perhaps some servers think the blast looks a bit “spammy”. If you don’t receive your email, you can always view the “back issues” on http://www.hiawathafantasyfootball.com.
Until Next Week,
Commish Peter