There are no such things as moral victories, that’s the accepted notion. If there was such a thing, the Vikings probably can claim one after a flawed but plucky showing in Denver on Sunday. Truth be told, Teddy outplayed Peyton in that game. Unfortunately, the Denver defense was just too strong against our depleted offensive line. Still, I will be watching plays like this on repeat this week.

Former Vikings Jared Allen spent a couple of years with the Bears, but with the Chicago season fading quickly, he was traded to Carolina, where he’s still doing Jared Allen things:

Still, Jamies Winston had a good showing with a little help from his friends. It’s like doing a trust fall at summer camp!

On the other side of things, Arian Foster finally returned to the field (much to the joy of those who drafted him!) only to have his own teammate punch the ball out of his hand for a TD the other way! Sorry, Arian!

Of course, we need some lowlights too. How about this 49ers display of teamwork?!

Or how the Raiders tried the old lateral series at the end of their game?

Valiant effort! But I have to close this section with a very, very important highlight for Eric Miller:

Yes, that’s perennial Eric Miller draft pick Chris Thompson with a big scamper! Should have kept him on roster, Miller.

After this weekend, only one undefeated team was left in the LOC, but there’s controversy! Scores:

The HitMan strikes again! Bret’s team is still rolling! This week he took down the Eh Team and handed them their first loss on the season behind huge games from LeVeon and Devonte. So could the Limbs keep pace by defeating WOLYA Nothing? They were down 7 heading into MNF with Calvin Johnson yet to go. And with under 2 minutes to play, Calvin caught the ball and stretched for a TD (that would also give the Lions the lead!). Then this happened:

Cam Chancellor, fresh off a hold out attempt, punched the ball out and it went out of the endzone. BUT WAIT! Another Seahawk appears to bat the ball out, which is actually illegal! The NFL admitted it soon after the game – that should have been a defensive penalty, the fumble shouldn’t have counted, the Lions should have had the ball with goal to go. The Limbs were framed!!!! Tom wins.

In other news, #CutTheCheck is on the board! Ron got his first win of the season, beating No Money Manziel handily this week when Jeremy Hill finally decided to show up. Tragically Malicious found themselves with a 24 point win over And He’s Loose!!! The Finches managed a 2 point win over The diddy and Butterslide is .500 after beating Fountain of Bacon.

The EL is top-heavy. The rich get richer and poor get poorer this week. Scores: 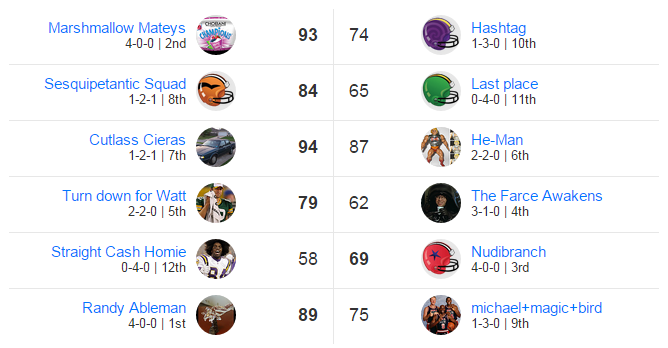 Jon got married on Saturday and extended his winning streak on Sunday, beating Straight Cash Homie to go 4-0! Impressive! Caleb’s team made the unfortunate call to bench Jeremy Hill this week in favor of Melvin Gordon. We’ve all been there. Another 4-0 team is Randy Ableman, who was able to get a 14 point win this week over m+m+b. And then there’s the Marshmallow Mateys, who beat Wayne’s newly re-dubbed Hashtag squad. Cory’s teams have been known to start fast and perform well in the regular season, it’s post-season success that’s always eluded him. Maybe this year is different! Sesquipetantic made sure that Last Place stayed winless this week. The Cieras got their first win by knocking off He-Man in The War of the Christophers. And finally, it was big news that the juggernaut Farce Awakens regressed this week and lost to Turn down for Watt. And just when I was thinking he was on pace for team of the week too… 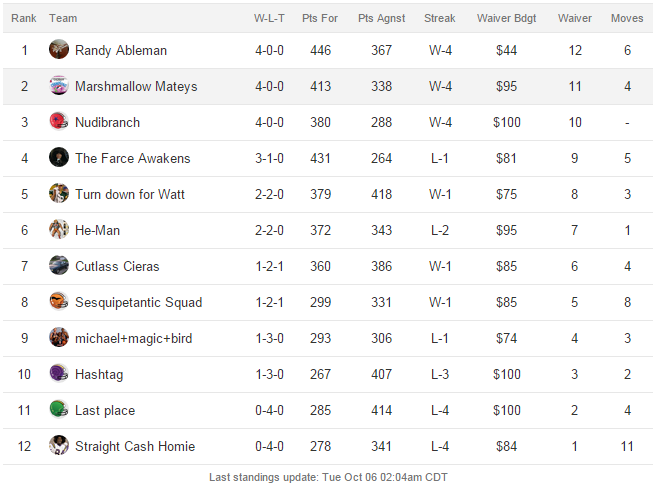 It seems like the HFFLUBTotW curse may be taking this year off. Award winners are currently 3-0 in the week following their win. Would the Nerd Herd keep pace? Scores:

The Tusken Raiders didn’t make it easy, but Bob’s team remained undefeated with a 3 point win! Bob is 4-0 despite having a lower total points number than the rest of the top 6 teams! On the other side of things, KRUG and Polska are both 0-4 after difficult losses this week to Nana Nancy and Amanda Hugginkiss, respectively. It sounds like KRUG is fielding offers looking to shake things up on his roster and Polska has already made 10 moves trying to piece it together.

Hanging in 2nd place is The Original Wonky, who has bounced back from a week 1 loss to a 3 game winning streak. This week, the Dominators felt the wrath. The Stale Muffins are 3-1, but barely made it by Russ this week with a 4 point margin. And Mighty Mouse Rat is at .500 along with Flanders as Luke took this week’s game by 6 points! 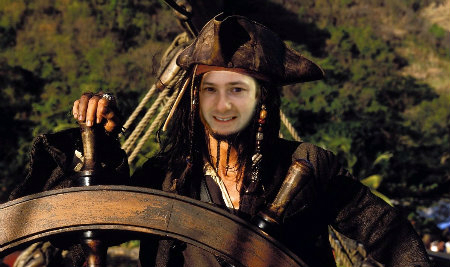 The Marshmallow Mateys! Don’t put him in a box, Cory’s team can’t be contained! Looking at his roster, it’s almost unfathomable the booty he was able to acquire in the draft. He went to the bottom shelf and picked up the bargain Devonte Freeman in the 9th round! After Ryan Mathews and Matt Asiata went! Freeman has scored 69 points in the last two weeks!

Last week it was two, this week it’s four teams on byes! Check your rosters for players from these teams: Minnesota, New York Jets, Carolina and Miami (who needs the week off to install their new coach).

In case you’re wondering, the trade deadline is November 13th. After that date, no further trades are allowed, it’s all waivers and free agents. So there’s still time to craft that perfect trade to benefit two teams! Or to fleece someone in your league (*coughDevTylercough*). Either way.

Check out the updated SuperStandings and see how you stack up against the HFFL Universe!