Well folks, the NFL is winding down the regular season and some teams have flat out given up. Case in point, the playoff eliminated Giants, who were without the suspended Odell Beckham. They gave up 49 points to the playoff-bound Vikings, including these 6:

The biggest news from Sunday was probably the fact that the Panthers finally suffered their first loss of the season. The Falcons were the team to take them down thanks to the efforts of one Julio Jones. Check out this TD catch from the stud WR:

The Seahawks are one hot team right now, but they got beat at home on Sunday by the Rams. Even the Rams punter was fired up. So fired up in fact, that he was flagged for a personal foul. Yes, the PUNTER.

Speaking of wacky, I have no context for this pic, but what in the world is going on here? 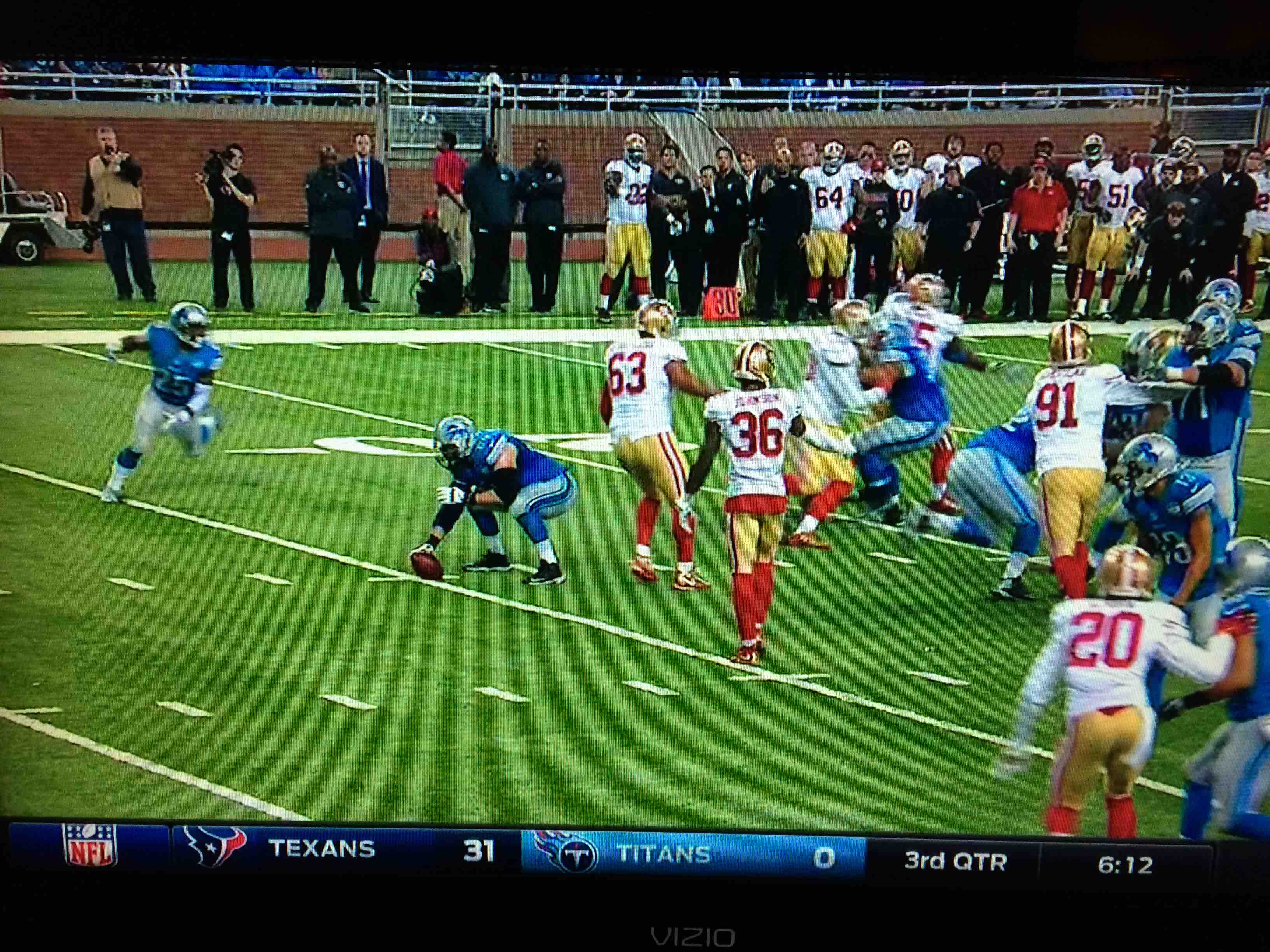 And let’s talk for a minute about the Cardinals/Packers game. The Packers lost to the Cards and will now play the Vikes on Sunday night for the division title. But it was the fashion in which the Pack got beat on Sunday. They got beat by this guy: 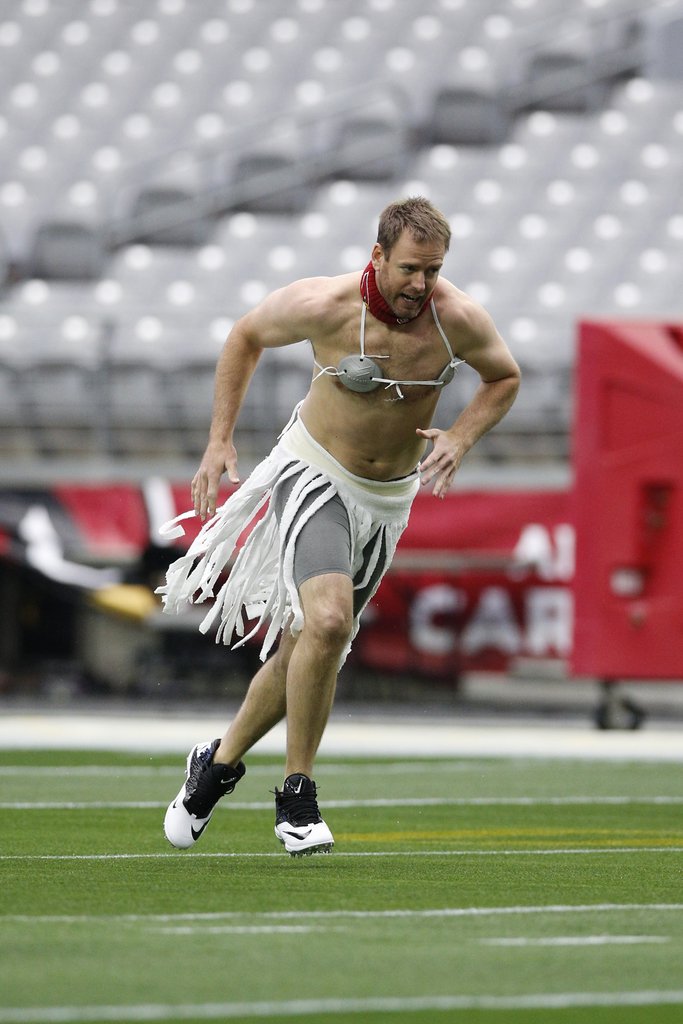 Yes, MVP candidate Carson Palmer came out for warmups like this after losing a team QB challenge during the week. But this goofy guy shredded the Packers on Sunday. And the Packers didn’t like it one bit.

Now, before we dive into the details of the final week….

Last week, Jacksonville RB Denard Robinson took a handoff and then fumbled the ball backward 13 yards where it was recovered by the Jags. The NFL initially credited Robinson with -13 yards on the play. Technically, he didn’t lose 13 yards there, he gained zero and fumbled the ball back. Still, the stats went into the record. Then, ON FRIDAY, the NFL issued a stat correction adding 13 yards to his total for the game bringing his total up from 28 to 41. This would have added 2 points to his total in our league scoring system. ANYWAY, there’s only one team who cares about this: The Muffins. They lost their semi-final game last week to Wonky… by 1 point…with Denard in the lineup. Unfortunately, the stat correction took until Friday, after the Thursday game was complete and the league week had begun. The results will stand. Which means that The Muffins were left out of the PL Super Bowl due to a questionable call. He cries injustice!

All the action this week was epic and there were some wild finishes. But the big questions are these: who won the trophies and who won LOC eligibility? We sort it out…. NOW.

It was The Eh Team vs. The HitMan for the title and these teams didn’t disappoint. Scores:

Eric ran out to a lead on Saturday night thanks to Jordan Reed’s big game, but trailed going into Monday night. Still, he had Emmanuel Sanders slotted in as his final hope. Sanders scored a TD and Eric scored an upset win over Bret for the title in the LOC!! It was an incredible game to cap an incredible season from Eric, who kept finding ways to win games this year when it counted. His 1127 were the lowest points for in the playoffs in the LOC and yet here he stands with the trophy. Amazing. In the 3rd place game, the Limbs and Malicious were playing for their LOC lives – loser gets dropped. The Limbs bounced back from a bad week last week to win going away and will stay in the big league for another year. Mark, on the other hand, will experience a lower league for the first time in his HFFL career! It was also “win or go down” for Tom and Jim in the 6th place game, but Tom was able to hold serve and win his way back for another year!

So here are your final standings for the League of Champions:

Keeping their eligibility for next year are Eric, Bret, Peter and Tom!

It was another close title game in the EL as Cory and Nate fought hard for the trophy. Scores:

If not for the Arizona defense and their 33 points (!!!), this would have been a blowout win for the Mateys. As it was, Nate had a slim glimmer of hope on Monday night as his kicker Brandon McManus took the field. McManus managed to net 8 points falling 7 short of the equalizer. The Mateys prevail and will hoist the trophy for the first time! Congrats to Cory on a great season! Nate, you’ll meet your rival again next year in the LOC! Joining them in the big league will be Aaron, who vanquished the Cieras in the 3rd place game and earned his ticket. And the final EL team making the jump next year will be … Comeback Kid!! Caleb managed an improbable 1 point win over Nudibranch this week! Remember, Caleb started the season 0-6 and things were not looking good. From there, he when 8-1!! So rookie Caleb earns LOC eligibility in his first year! Jon will toil again in a lower league next year.

So the LOC eligibile teams from the EL for next year are Cory, Nate, Aaron and Caleb!

Deep breath…. okay, here we go. The PL Super Bowl matched up rookie Wonky with rookie Flanders. Thanks to the controversy mentioned above, the Muffins were watching closely from their 3rd place game. If they outscored Flanders this week, the suffering would be amplified. Still, if they beat their ancient rival Nana Nancy, they will at least get into the LOC and maybe exact revenge on Wonky next year. Umm…

Congrats to Wonky!! The 7-6 team that could. Matt snuck into the playoffs and had to win all 3 of his games to get the trophy, which he did (with an asterisk). His super bowl MVPs are Julio Jones and Blair Walsh, each scoring 23 points. Flanders, on the other hand, picked a bad week to regress from his usual points output. Still, he also wins a seat at the LOC table next year. So how did the Muffins season end? Well… he lost to Nana Nancy by 4 when Tyler’s Blake Bortles went off for 30 points and Tom Brady only managed 12. The circle is now complete – Nana Nancy advances to the LOC while the Muffins ponder what transpired in the last 7 days.

It was also a close game in the PL Toilet Super Bowl as Mighty Mouse Rat and Nerd Herd duked it out. In the end, the NERD HERD prevailed and took the long way around to winning a ticket to the LOC! Luke thought he had it in the bag when Cousins scored 32 on Saturday, but the rest of his lineup was rather pedestrian. The Herd did just enough to come out on top! Congrats to Bob!

Invited to the LOC next year from the PL will be Matt, Nick, Tyler and Bob!

Obviously, our three Super Bowl winners are the final awards recipients of the year! Congrats to Eric for his epic come-from-behind win in the LOC Super Bowl! Congrats to Cory (the tallest of the three, apparently) on his wire-to-wire dominance in the EL! And congrats to rookie Matt on his controversial, but still fairly deserved win in the PL Super Bowl. Although, the asterisk be added and will definitely go down in the annals of the league as one of the most bizarre things we’ve ever seen. If only we could have mashed Matt and Dev up into the one single entity…

That’s a wrap, folks! Thanks for a great season! Historical stats have now been updated and can be viewed here. Of note, the All-Time Power Rankings  have shifted at the top as Tyler now holds a slim lead over Jim and Peter with 80 power points in his career. More on what that means on the rankings board.

Before you go, please note that just like last year, we will have a brief HFFL Awards Ceremony during the Men’s Night in January! Mark your calendars:

Come for video games, a chili cook-off and the wacky awards ceremony! If you won a trophy last year, please hand it back to me before or at the Men’s night so it can be passed on! Come one and all!

Thanks again for a wild and crazy season in the HFFL!