In looking over the headlines from week 5, the big one for me is this one: The Minnesota Vikings are the only undefeated team in the NFL. How fun is that? In spite of missing numerous important players (Stephon Diggs missed this week’s tilt), they keep winning! Adam Thielen was the hero this week!

The Eagles were previously undefeated, but the Lions nipped them this week after a late comeback attempt ended with Wentz’s first INT. Still, Stafford had the highlight of the game after this play:

The Bills beat the Rams this week, but Tyrod Tylor had a boneheaded play here as he lined up behind the guard instead of the center for the shotgun snap! Can’t say that I’ve seen that one before.

And the Giants lost to the Packers on Sunday night, but OBJ seemed to shake off some of his recent struggles and even found the endzone again. You know what that means! Time to make up with the kicking net!

Okay, let’s turn our attention now the HFFL, where streaks are made to be broken! Or are they???

Last week, NINE teams bid for the services of Ravens RB Terrance West. Aaron won the day with a $55 bid!! Would West live up to that kind of FAAB money?! Scores:

The LOC had two undefeated teams coming into this week, though only one was a pure undefeated team since Eric had a pesky tie in his column. This week, they both took their lumps and lost close games! For the 4-0 HitMan, it was a 5 point loss to the Limbs! Bret had his chance on Monday night with Mike Evans AND Greg Olsen, but he couldn’t close the gap completely. The Limbs took the win and Bret’s place atop the league! Tyler had Tampa’s Charles Sims ready to roll, but Sims his the IR last week. That meant Tyler picked up and STARTED Jacquizz Rodgers on Monday night, and that was the difference. Rodgers’ 12 points gave him the win over Eric!

And what of $55 Terrance West? Well, Ableman did need a big week to get past Neighborino and got the requisite 108 to do it. West chipped in a decent 9 points, but Martellus Bennett was the real difference maker with 24. Unstoppable fell to the Mateys in a low scoring affair while Mr. Tech finally found his 2nd win in beating Nerd Herd. And the Comeback Kid crossed the century mark in a big victory over This Space. 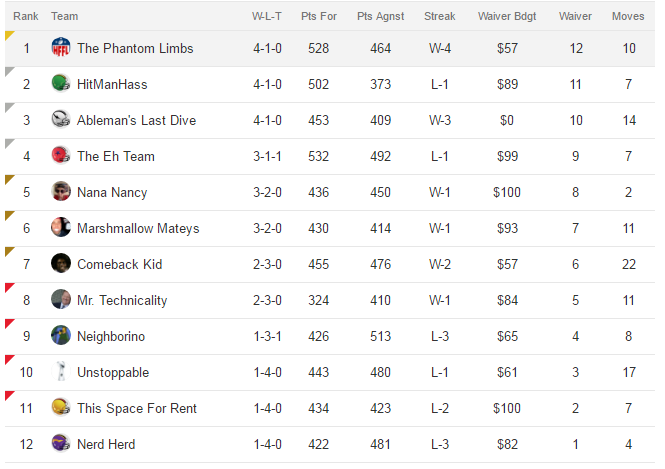 The PL this week was full of lopsided games across the board, with one notable exception. Scores: 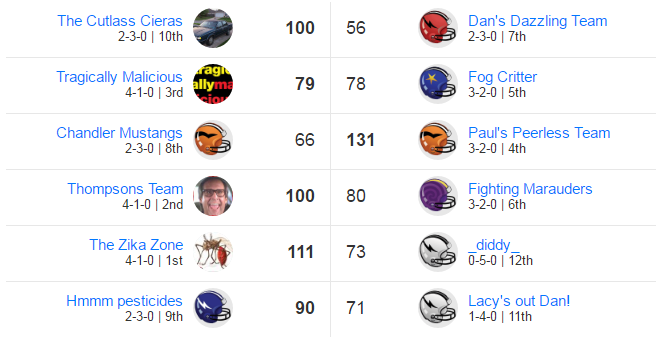 The Jacquizzinator figured prominently in the PL this week too! In the one game that was actually close, Malicious had the lead over Fog Critter going into Monday night. But Critter had Rodgers and a chance to steal the victory. In this case, however, Rodgers came up just short. His 12 points weren’t enough to push Luke past Mark and the game ended 79-78. What makes it really bitter is the fact that Luke had Tevin Coleman’s 22 points on the bench.

Zika keeps rolling. This week, he demolished the reigning HFFLUBTotW _diddy_ by a mile, keeping Jim winless on the season. Ouch. And it was a royal thrashing for the Mustangs at the hands of Paul’s Peerless Team. Paul nearly doubled up the Mustang’s score, winning by 65! Thompson’s Team brought down the Marauders by 20. Pesticides brought down Lacy’s Out by 19. And the Cieras crushed Dan’s Dazzling Team by 44. Yikes! The PL is a harsh realm indeed. 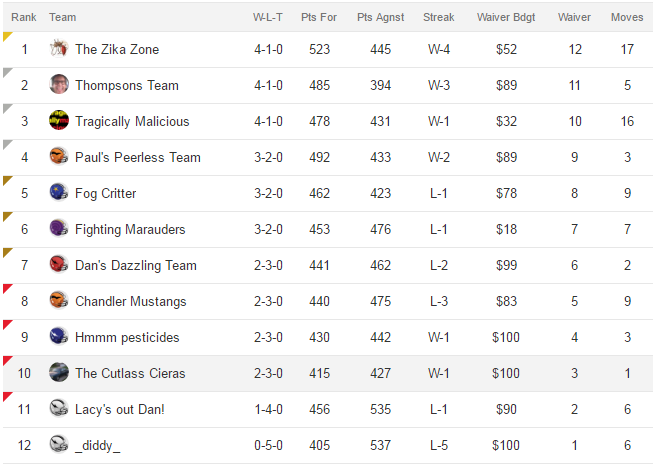 The EL was a bit of a bloodbath this week too. Still, like the PL, there was one nailbiter to be found. Scores: 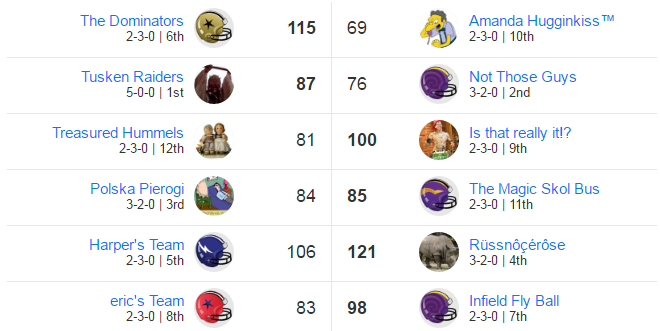 We first turn our attention to the tangle between Polska and Skol Bus, really the only close game in this league. Again, it was all about Monday night, but it was Jacquizz Show playing a role. It was Kelvin Benjamin. With no Cam Newton, the Panthers were very discombobulated on offense, but Kelvin still contributed. When the Bucs kicked their FG as time expired to win it, Benjamin was stuck at 70 receiving yards, which meant that Sam was stuck 1 point shy of tying up David. Tough way to go.

Monday night was also stressful for the undefeated Tusken Raiders. They actually trailed Not Those Guys after Sunday’s games, but Greg Olsen was primed for a big night as Derek Anderson’s safety valve for the Panthers on Monday. He netted 181 yards in the game and those 18 points pushed Andrew to the win! 5-0 for the Raiders and they’re the only undefeated team left! The Dominators lived up to their name and crushed Hugginkiss by 46. Russ exploded for 121 this week and put the hurt on Harper’s team. Is that really it? topped the Hummels by 19 for his 2nd win. And Infield Fly Ball also got their 2nd win at the expense of eric’s Team. Will any EL team be able to catch the Raiders, who are now 2 games up?! 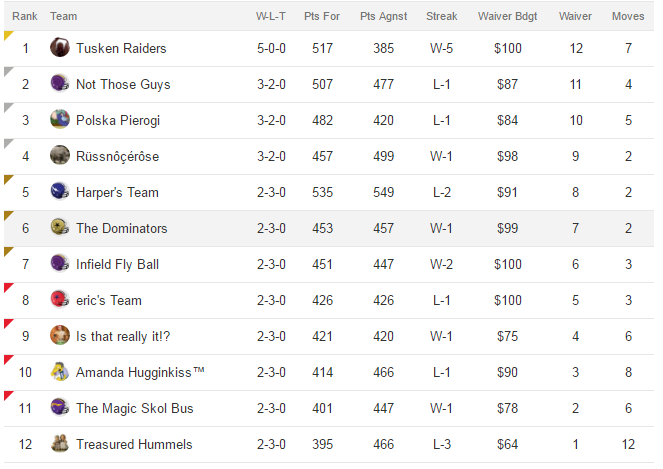 It took him until Monday night to close the deal, but the Tusken Raiders are now the sole undefeated team in the HFFL universe! With the ascending Derek Carr and the dominant Greg Olsen as his MVPs thus far, Andrew’s team looks pretty stacked top to bottom with AJ Green and CJ Anderson also in the mix. Although, receiving this arbitrary award all but guarantees he’ll lose next week, as the HFFLUBTotW winners are a combined 0-5 now in weeks following their recognition!!

Although, receiving this arbitrary award all but guarantees he’ll lose next week, as the HFFLUBTotW winners are a combined 0-5 now in weeks following their recognition!!

I guarantee the Vikings first loss won’t come in week 6… because they are on their bye along with Tampa Bay.

The Thursday game will be Broncos @ Chargers, so definitely some fantasy relevance in that one.

We’re to the point where I should start mentioning the trade deadline! We’re one month away from the deadline. All trades must be completed by November 12th. After that, it’s waivers and free agency only!

Remember, just because the undefeated Vikings have a bye week doesn’t mean you do! Work that wire and get back into the game! Good luck!