The Falcons have had a great season, but the Chiefs have been sneaky good for a season and a half now. On Sunday, they went head to head in a great matchup. With under 5 minutes to go, the Falcons scored a TD to put them up 28-27. Of course, they went for two to push the lead to 3. Then this happened:

That’s a Pick-2 for those of you scoring at home, and it put the Chiefs ahead by 1 and ultimately handed them the game. What a wild finish!

The Packer’s won in the snow and they’re now tied with the Vikings in the NFC North behind Detroit. Rodgers and Cobb are happy.

Raiders punter Marquette King is also happy. His team is atop the AFC and he can’t help but dance! Still, maybe don’t use the flag as a dance prop?

Is Terrell Suggs happy? I honestly can’t tell here. The Ravens won in a blowout and Suggs lost his helmet on this play, but his reaction is … ummm….

And maybe my favorite picture from Sunday is of this referee who found himself in the pile after a fumble. His face says it all. 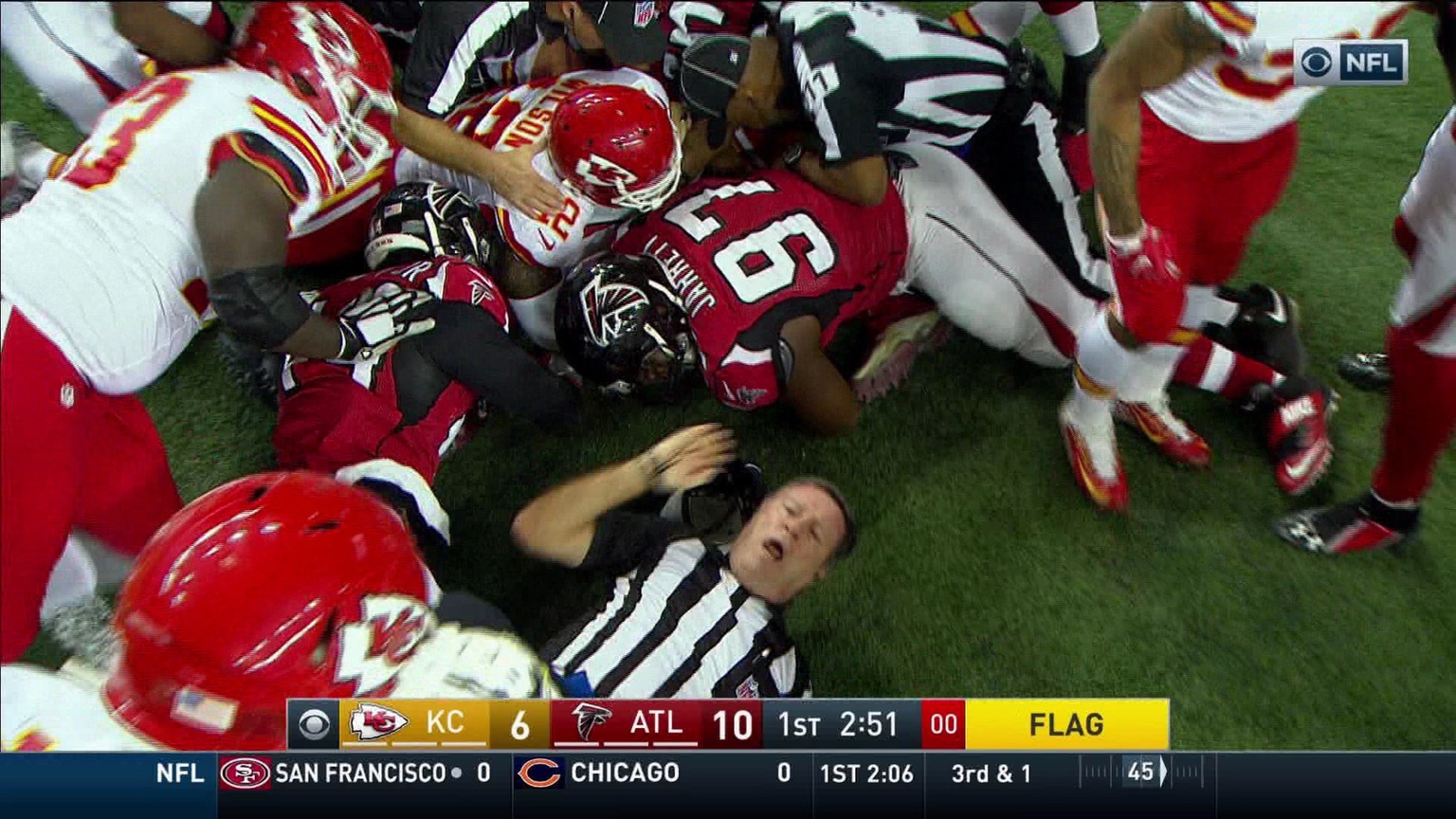 But we’ve got a lot to get to today! It’s playoff time! The regular season has concluded! Who’s in and who’s out?! That’s the question! And would anyone be able to enter the playoffs on a hot streak?! Or are teams stumbling their way in?!

The Eh Team had the inside track to the playoffs, but for Caleb and Tyler, the playoffs started early! Scores: 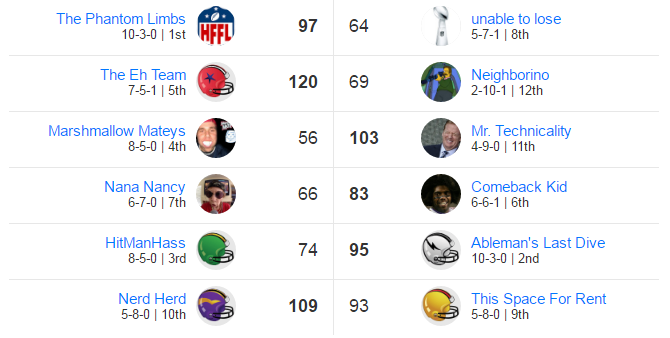 Caleb and Tyler were tangled up all weekend in their matchup, but when Monday night rolled around Caleb rolled away and took the final playoff spot in the LOC. Tyler was knocked down into the Consolation Bracket, taking the road of most resistance back to the LOC. The top two teams, the Limbs and Ableman, each won their games and secured first round byes. HitManHass took the L from Ableman and settled for the 3rd seed. The Mateys also took a loss, from Mr Tech no less, and wound up in 4th position. He’ll face The Eh Team, rekindling a years-long bitter rivalry (some would say)!! The rest of the teams will be battling it out in the Toilet Bowl Bracket, where the margin for error is zero! 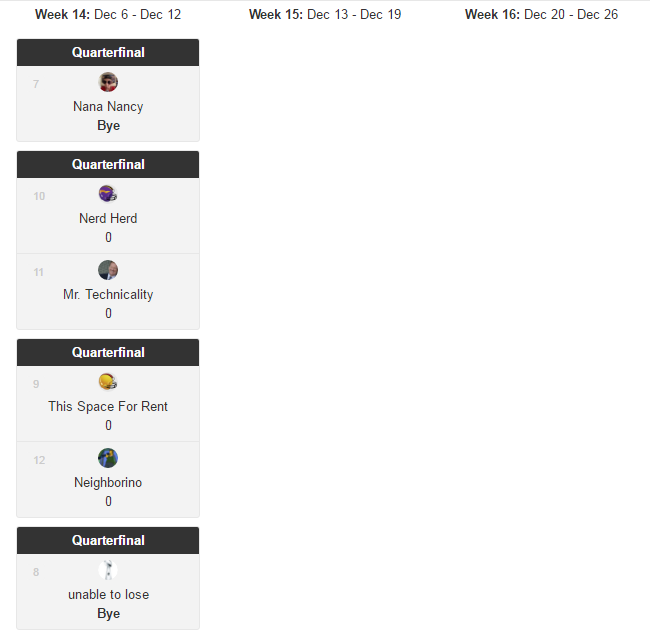 In the PL, there were still playoff spots up for grabs and the top two teams are suddenly looking vulnerable!!! Anything can happen! Scores:

Let’s start at the top, shall we? Zika finished the regular season losing two of his last 3 games! This week, Thompsons Team held him to a league-low 63 points! Ron still holds the top playoff seed, but what does this late-season slump mean!? The 2nd lowest points in the PL this week were from Malicious, your #2 seed in the playoffs and loser to Lacy’s Out Dan! So the top two teams get a week off to figure out how to prevent this from happening again! Thompson’s team gets a playoff spot with the win! The Mustangs climbed to the #3 seed by beating the Cieras in a barn burner. The Marauders continued their late season bloom by beating Paul’s team and getting to #4. Fog Critter? He lost to the resurgent Diddy, but keeps his playoff spot by a hair’s breadth. So the field is set, but nothing is certain in the PL! 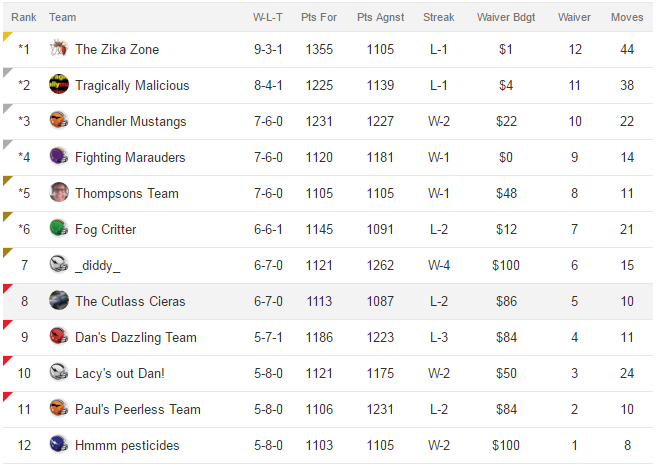 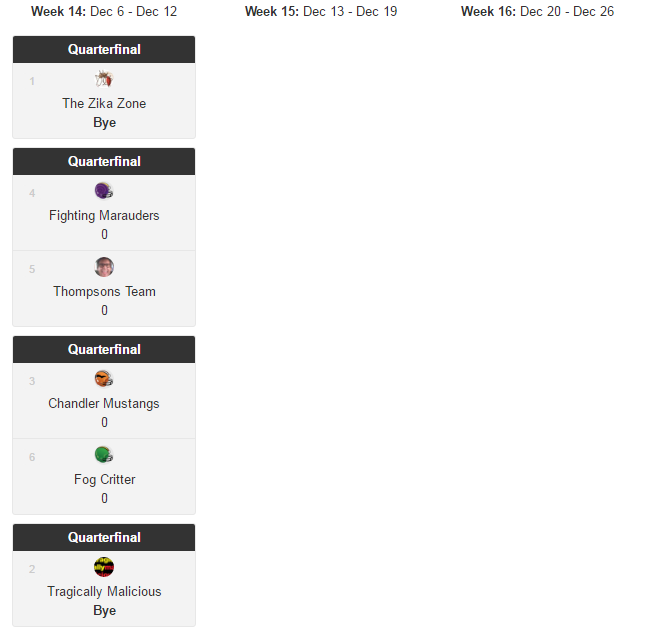 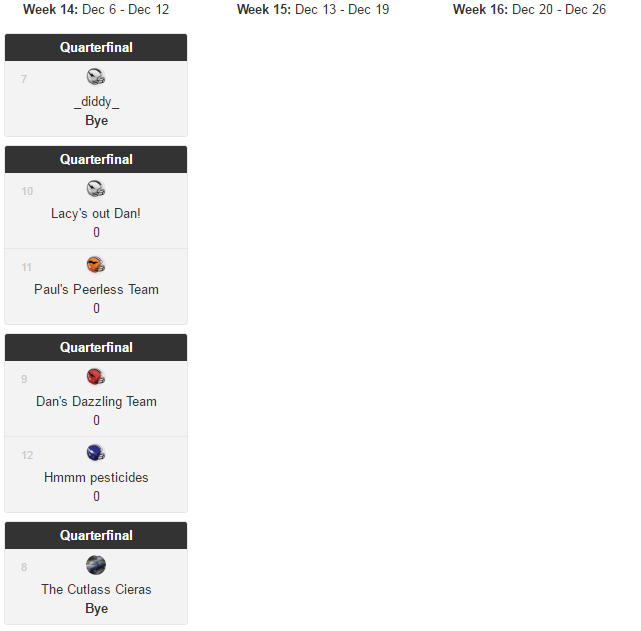 The current hottest team in the HFFL Universe resides in the EL. And DOES NO ONE WANT THE FINAL PLAYOFF SPOT!?!?! Scores:

With a 5 game winning streak, Darren’s squad is the hottest team right now, but it wasn’t easy! This week, he notched his 5th straight win by beating Skol Bus by a single point! Darren grabs the #3 seed! The top two seeds faced off in the final week and it was the Tusken Raiders beating Kat in a Hat to solidify the #1 seed and make a statement. Will these two teams meet again in the EL Super Bowl?? Polska needed a win this week, but he faced Harper’s high-scoring squad. But remember, Hyatt’s team is crazy. Polska beat him to get the #4 seed. That loss for Hyatt also meant that even though Eric and Russ both lost, they get into the playoffs and Hyatt doesn’t. Wow. This season for Hyatt is unreal. He’ll be flashing back to this for awhile.

So it seemed like no one wanted the final playoff spot in the EL, but it’s Russ who captures that flag and will face Darren’s hot team in round 1! The rest of the field will be fighting for their lives in the Toilet Bowl! 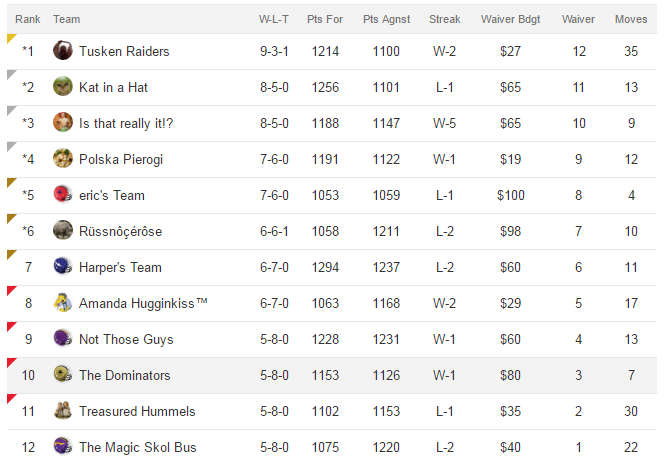 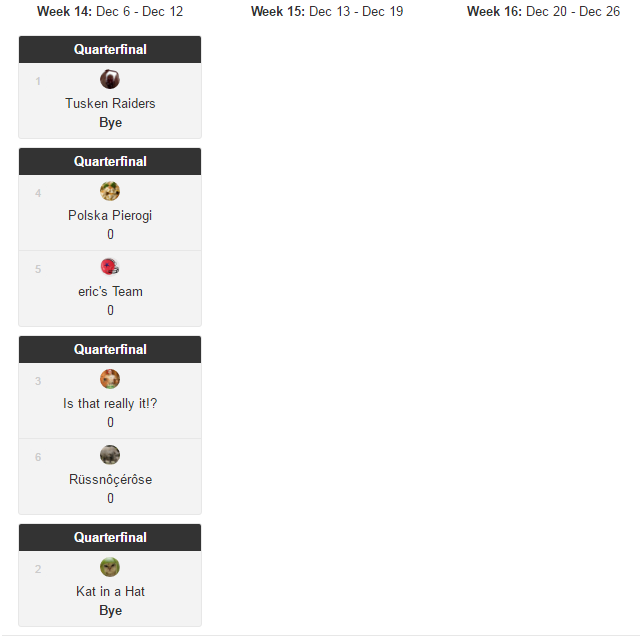 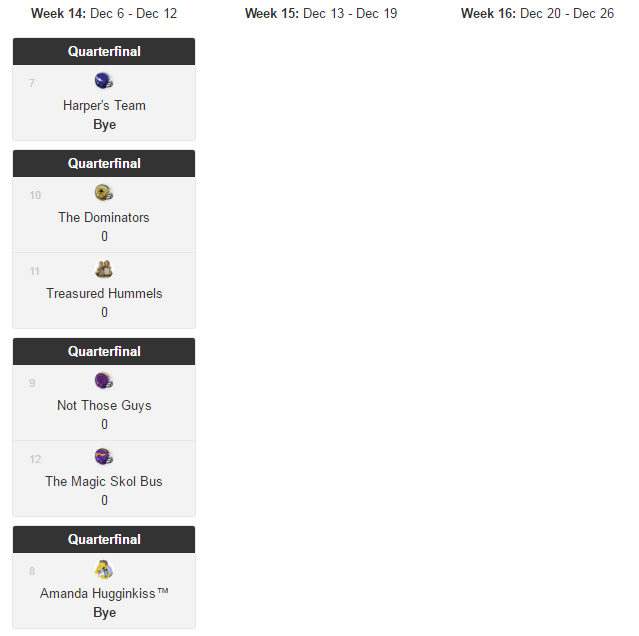 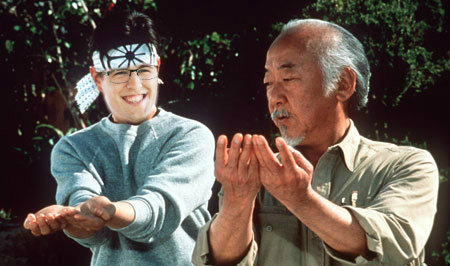 Lots of teams had necessary wins this week, but it was Caleb who really had a “win and you’re in” situation in his game against Tyler. In a tight contest, he used a late push to get the win and punch his ticket to the playoffs!

He’s gotta be feeling good after that beat down! And he’s going to need the momentum as he faces HitManHass next week!

Thursday night is Raiders @ Chiefs! Plenty of heavy hitters in that one, so be ready! Now is NOT the time to stop paying attention to your team!

The playoffs are officially here! If you’re one of the fortunate few, you’ve earned a bye this week! So sit back, relax and scout your potential opponents! But don’t get lazy and forget to look at your rosters for any injuries or issues that need addressing before you’re back on the field! And remember, the top 3 finishers in the playoff brackets will earn LOC eligibility next year PLUS the winner of each consolation bracket will also get in! So even if you finished the regular season in LAST PLACE, your hopes are not fully dashed! Spark a big run now and maybe your luck will turn!