All season I’ve been confused by seeing a team that’s abbreviated “LAC”. That’s the NBA’s L.A. Clippers, right!? Well, I’ve since learned that the San Diego Chargers have moved to L.A. and are playing their home games in a stadium full of their opponent’s fans.

Very embarrassing look for Chargers & NFL for a home game to look like this. 95% Broncos fans. pic.twitter.com/GgCFaMykcb

Well, in spite of the Denver fans, the Chargers shutout the Broncos for their 3rd straight win! Huh. I guess that’s something. Still, watch out for that stadium. It’s not a fun place to play.

Oh cool the Chargers pretended they were on a slip n slide for a TD celebration pic.twitter.com/EoPbMZO1IZ

We also saw some slippy conditions for the Cardinals (and their whole season). After Carson Palmer left with a broken arm, Drew Stanton came in and… well…

In case you were wondering how it's going for Drew Stanton/Supergirl at QB after the Carson Palmer injury pic.twitter.com/9aRClY8bKO

It wasn’t slippery on Sunday night football as the Patriots played the Falcons in a Super Bowl rematch, but the fog was the 3rd party to the game. 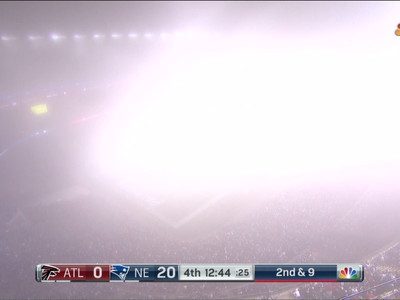 The Falcons never really threatened in this game as the Pats walked them through a hazy, recurring nightmare.

What the Atlanta Falcons see in their nightmares. pic.twitter.com/stZzTw5fss

Or was it all a conspiracy??? All I know is that the NFL has been promoting the heck out of a certain movie lately…

The HFFL regular season is officially past the halfway point and the margin for error is shrinking by the day. Let’s see who’s in the hunt.

Patience doesn’t always pay off in fantasy football, but it did for a couple of teams in the LOC this week. Scores:

And down goes Real United! In the game of the week in the LOC, Mr. Thompson finally handed a loss to Andrew’s squad in a 3 point thriller! Chris absorbed a zero from Fournette and a zero from Austin Hooper and still got the W thanks to Dak, Doug and Boswell.

Mark’s been patient with Amari Cooper all year and he was finally rewarded this week as Cooper exploded on Thursday night with 33 points, pushing Malicious all the way to victory over the imploding Eh Team. Eric H has been riding the waves with Zeke Elliott all season and got a bit of everything this week – suspended, not suspended, out of the lineup, in the lineup – 39 points. The Limbs didn’t stand a chance, losing by 74 POINTS!. Nerd Herd was also flattened as RUTS and Wentz ran roughshod over them. It was a great dual between Comeback and Harper, but the ball bounced Caleb’s way as he got the 3 point win. And Lucky Bears? have quietly won 3 straight games after taking down Favre Out Dude.

Last week, DIDDY asserted himself to the tune of 129 points, putting the PL on notice. And then…. well… Scores:

DIDDY’s score sheet evaporated this week as he went from 129 last week to 44 this week and a loss to the ascendant Omahallelujah. That loss left the door open from some 2nd tier teams to leapfrog up the standings. The Beta Blockers and DITKA burned the barn all weekend and David’s squad came out ahead by 4 in an entertaining matchup! That puts the Blockers atop the league with their 4 game winning streak! I guess the 25 roster moves in 7 weeks is working!

There were so many storylines in the PL this week. Nate’s team, after finding their first win of the season in week 6, found their 2nd win of the season in week 7! Recently re-named The Oneders, Nate might have to go with the Tudors after holding Hugginkiss to 51 this week. Playing the Layne Ducks, Luke renamed his team Fantastic Mr. Fox. It worked as the Foxes feasted on the Ducks and moved to 5-2. Nana Nancy had a bad time, scoring a respectable 76, but getting mowed down by Don QuiJulio anyway. AND THIS JUST IN! The Dominators have won a game! Spencer’s team held Tom to 58 and walked away with their first win of the year!! I think you might hear more about that in a minute.

The EL couldn’t match the drama of the PL this week, but there was movement atop the standings. Scores:

Woah! What got into the Cieras??! Prior to this week, Wachter’s team was averaging 71.67 pts/wk. This week, they nearly doubled that with just Wentz and Cooper blowing up. And it so happened that this week was one of the semi-annual War of the Christophers and it was Wachter over Anderson in this round.

Elsewhere, the Mateys took a rare loss at the hands of Polska by 10 points. That lowers Cory to 5-2, which he shares with two other teams – including the streaking Polska. Marshawn’s Back (who won’t have Lynch next week thanks to a suspension), needed a big week against Clint and got it to grab a share of 5-2. Wayne’s Fame righted the ship and beat Pesticides to get back above .500. The Hitman also moved the needle by beating Mad Scientist. And in the lower decks, Russ got a 15 point win over Sesquipedantic.

Six weeks is a long time to wait for your first win of the season. It can feel like a lifetime of wandering in the wilderness, searching for the right lineup that will finally end the torment. Thankfully, Spencer is now in the win column thanks to Amari Cooper’s breakout game! Congrats, Dominators!

Welcome to THE BYE WEEK APOCALYPSE!!!

We will have six teams on byes each of the next two weeks! This is often the toughest part of the schedule to navigate, so good luck. This week, you’ll have to go without players from the … Cardinals, Packers, Jaguars, Rams, Giants and Titans.

Also, remember that the trade deadline is fast approaching – trading will close on November 11th.

Both Paul and Sarah-Ashley survived week 7 in the Survival Pool, so we’ll have to wait to see if we’ll have a sole winner next week.

And that’s a wrap on week 7! Good luck in the 2nd half of the season, everyone!